In Auckland, New Zealand to be a pedestrian is very easy – everything is build to accommodate your needs – road crossings, traffic lights you name it – all taken care of…even including all provisions for people with disabilities.  Next time when you are just about to cross the road on Queen Street in Auckland CBD – think about all of it and most importantly – why all of it is done…In this article I want to discuss blindness – as a part of your

Most importantly how diabetes can lead to blindness. As you all know diabetes is considered to be the silent killer of the human race.

Diabetic retinopathy is one of the leading causes of blindness.  Due to the uncontrolled blood sugar, the small arteries and veins in the inside of the eye called the retina become blocked (nothing to do with Retina Display from Apple) .  These changes in the blood vessels of the eye may not be felt at first. If this worsens, it can considerably affect your vision. 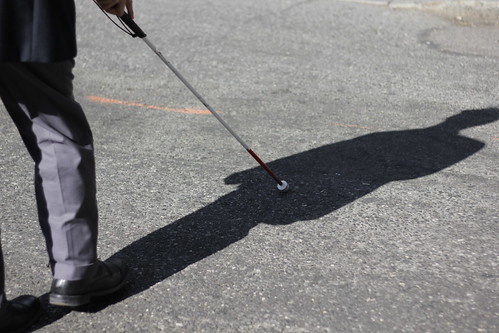 High blood sugar can damage blood vessels especially the arteries in our body.  The small arteries inside the eye are no exception.  These vessels give the needed nutrients and oxygen to the retina, the thin covering of the inside of the eye.  If they are damaged, the body reacts by sending substances that signals the remaining arteries to branch out to compensate for their dwindling numbers.  But in doing so, the disease worsens.  The new arteries that are made are often dysfunctional.  They have thin walls and can easily bleed.  If majority of the arteries in the eye are leaky, this will cause bleeding in the retina.  There can be retinal detachments that can lead to poor vision or blindness. Diabetics affected by retinopathy mostly complain of blurred or fuzzy vision.  They describe it as if a hazy cloud is blocking their vision.  Most of the time, they blame their reading glasses and consult an optometrist to have them adjusted.  As it worsens, there can be distortion of the objects or spots in the field of vision.  If the retina becomes severely damaged and detaches from the wall inside the eye, vision may be partially blocked by an area of darkness.  Vision in retinal detachment appears as if a curtain is blocking an area of the visual field.  When this  happens, immediate surgical intervention is needed to avoid permanent blindness. Since we are in New Zealand – think about your health insurance or a public waiting list.

Treatment for diabetic neuropathy depends on the severity of the disease.  During the early stages, when there are still a few affected retinal vessels, controlling the blood sugar can improve vision.  However, in cases where the retina is already filled by leaking and blocked arteries, the eye should undergo laser therapy.  This is a minor procedure where a laser is directed on the arteries that are leaking.  The laser burns the arteries to prevent them from bleeding further.  Vision mostly improves after undergoing this procedure.  There can be a small spot in the visual field after the laser therapy.  This usually goes away after a week or so. If there is bleeding within the eye because of the leaky arteries, a vitrectomy needs to be done- a major surgical procedure which is even performed under under general anesthesia. A very small incision is made and blood inside the eye is removed by delicate instruments.  If the retina is detached, the surgeon can reattach it to the wall of the eye during vitrectomy.

« Cancer in Trauma Insurance » What is Trauma Insurance?
My name is Dom Bish welcome to i-insure.co.nz this website is designed for you. It is packed with valuable and easy to understand information for you to decide which product you might need. Please Contact Me with all your questions. Click below to get my Disclosure Statement